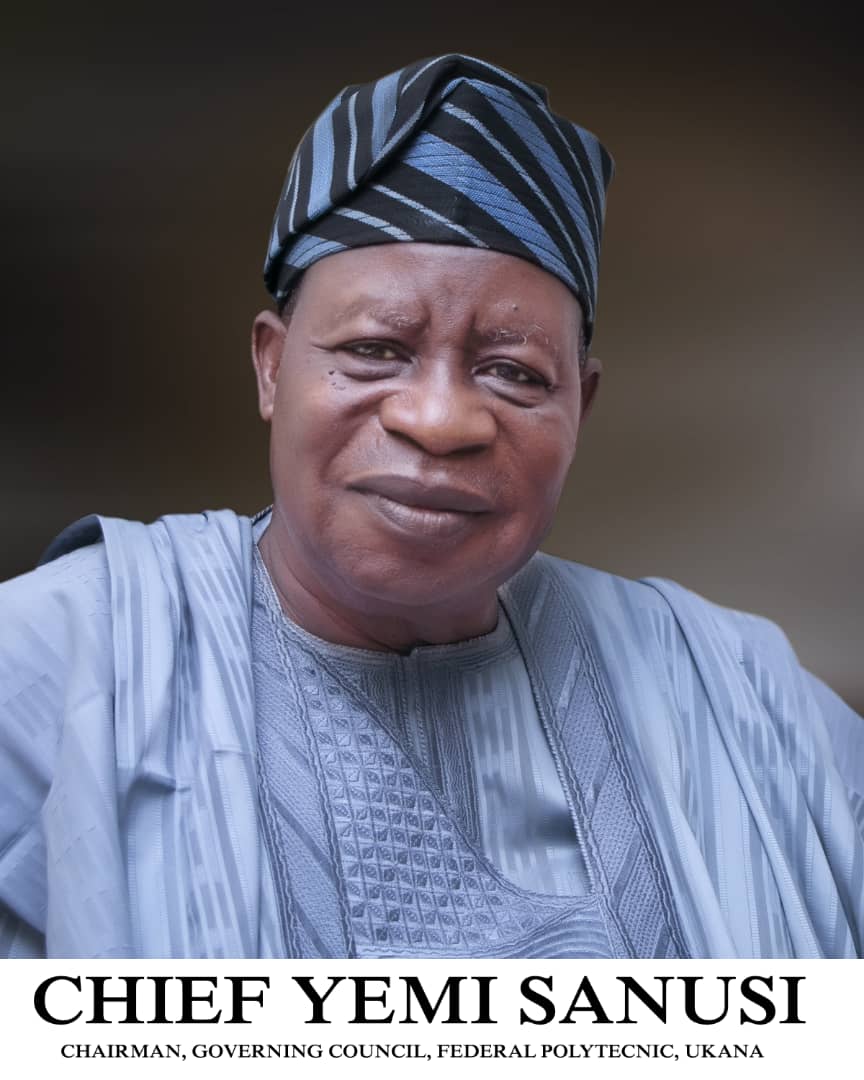 The Chairman Governing Council to Federal Polytechnic Ukana, Chief Yemi Sanusi has pledged to put in place a dynamic and purposeful leadership style with a view to set the Polytechnic on the trajectory of growth and development.

In his words, “this Governing Council is poised to put in its best in repositioning and placing this Polytechnic on the trajectory of growth, development and academic excellence. We shall leave no stone unturned in achieving this, and so I call on the Management and staff of the Polytechnic to cooperate with us. I am calling for your commitment and dedication to duties. With God on our side, we shall succeed together,” he stressed.

Chief Sanusi noted that the problems faced by the institution was not only peculiar to the Polytechnic but applicable to other sister institutions. He promised that the new Council will work collectively using their contacts to address those challenges. He commended the Rector for the infrastructural development and acquisition of equipment for the take-off of some Engineering Programmes at the main campus, and urged him to keep up his good relationship with TETfund which, he noted, has been of immense support to the Polytechnic so far.

The Council Chairman while fraternizing with staff of the Polytechnic, expressed his gratitude over the level of acceptance given to him and members of the Council. He posited that the Govering Council is open to working with everyone to achieve success, expressing optimism that the set time for Federal Polytechnic Ukana to be recognised and announced nationwide has come.

The Governing Council Chairman assured staff that the Polytechnic under his watch shall be transformed to a centre of excellence in technical education in Nigeria.

Speaking during the converge, the Rector Federal Polytechnic Ukana, Dr. Uduak Sunday Ukekpe welcomed the Chairman and members of the Governing Council to the Polytechnic and assured them of maximum cooperation of management in the task of jump starting the development agenda of the institution

Dr. Ukekpe described the Governing Council members as a combination of intellectuals, academic gurus and political giants, adding that the institution is left in the best and safest hands. He thanked President Buhari for the gift of a star-studded Governing Council.

There were goodwill messages from the Academic Staff Union (ASUP), the Senior Staff Association of Nigerian Polytechnics (SSANIP), among others.

APPLICATION FOR ADMISSION INTO PROGRAMMES OF STUDIES IN THE 2022/2023 ACADEMIC SESSION.